Tabriz, designed by Randy Flynn and published by Crafty Games, puts players in the great carpet markets of the Persian city of Tabriz. Each round, you'll send your assistants into the market to collect supplies, then turn those into valuable commissions. As you grow your business, you'll build a powerful workshop that continues to give you income and abilities each round.

Development on Tabriz focused on three key areas: increasing replayability, improving the game arc, and design of a solo mode. Tabriz's core systems changed very little, but we doubled the amount of content in the tiles, designing alternate back versions for every action space in the game, as well as redesigning the commission deck to provide more differentiated options. Originally, the only type of recurring reward players earned was income, but we found that by adding new "workshop" abilities to completed commissions, we could create a stronger sense of improvement during the game and drive the game's arc to a stronger finish.

In Tabriz's solo mode, each player board has a unique Rival Merchant personality on the back, all of which employ different strategies against you. Rather than an automa deck, each Rival Merchant is driven by the game's dice pool, so solo players have an additional avenue of interaction with the system when they use tiles in the game that manipulate the available dice in the pool.

As part of the development process, we nearly doubled the amount of tiles by adding alternate back sides to every shop, courtyard, and alley tile. While the additional variability in setup drove new player choices, we felt there was still room for the game to allow players to explore more diverse strategies through play. We looked for more ways players could build individual game states and value resources differently based on their individual choices.

The original prototype only had one type of ongoing reward available on carpet commissions: money. We slowly added more and more variety to the carpets, including all types of resources and personal workshop actions. Expanding the ongoing rewards players had access to naturally led to divergent game states and strategies between players as they completed carpet commissions. 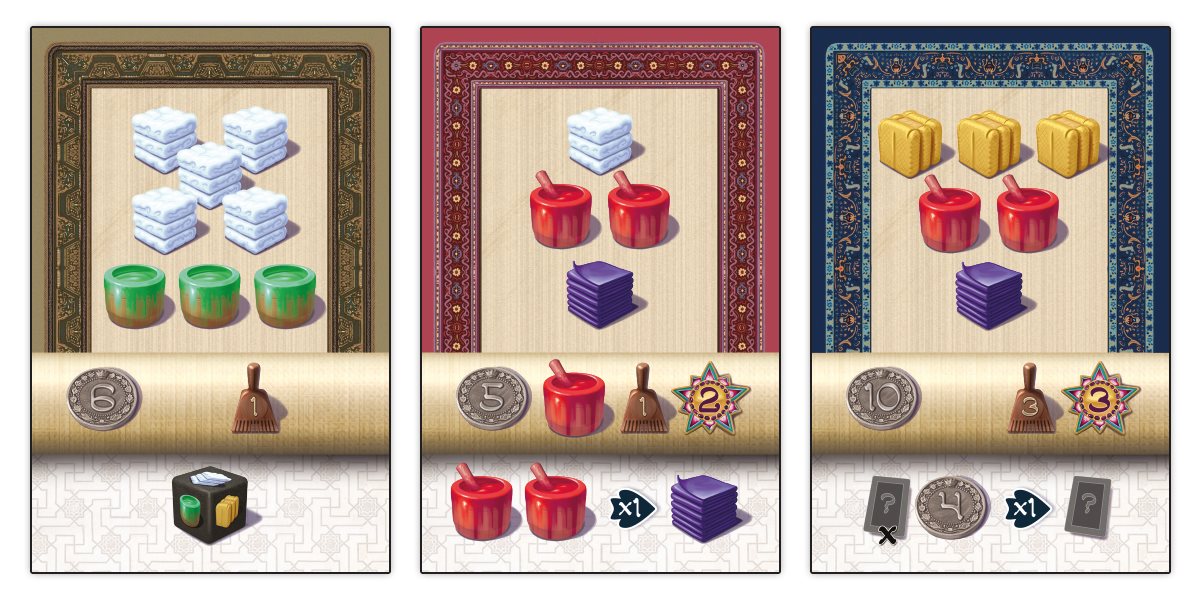 Playtesters responded really well to the workshop actions, and the Crafty Games team asked us to push the engine building aspects of the game even further. With that in mind, we created the alternate Market Square where players could use their assistants to trigger their now personalized tableau additional times. In the Advanced Workshop game mode, players start with an asymmetric set of resources and workshop actions.

With this new tableau engine in place we wanted to push the variety of carpet commissions as far as possible. To evaluate content distribution across the cards, we created a mathematical model that evaluated all of their various inputs and outputs.

While we won't go too deep into the math, our core model for Tabriz is based on a game modeling method called action economy. Players have a limited number of actions each round, so costs to acquire resources aren't just money, they are time in actions. A player's available money can then be re-expressed as a value in actions. For Tabriz's action economy model, we evaluate cards based on how many actions it takes to create the input, and how many actions worth of resources you get from the output. Using that model we were able to fairly balance both very inexpensive commissions and commissions that provide extremely strong abilities.

These additions combined with the multiple board tiles and the skill track to create space for players to discover unique strategies to pursue in every game. While having additional setups is often perceived as the "replayability" of a game, the deepening of strategic options on the commissions is what we believe really opens up the strategy space for Tabriz.

"The tight and competitive markets are what make Tabriz come alive. Working through the precise path to tak in order to fufill your order is a tense and engaging puzzle that is constantly changing based on other players' choices." — Pia and Andrew, BoardGameSPAM

While it wasn't under Brieger Creative, our frequent collaborators at Quillsilver were responsible for the graphic design, art direction, and the beautiful playmat illustration for Tabriz. Brieger Creative and Quillsilver are available to book together for development and production packages if you like their work on Tabriz.