Rurik, designed by Stan Kordonskiy and published by Piecekeeper Games, is a euro-style realm building game featuring area control, resource management, and a new mechanic - "auction programming." Numbered workers are used to bid on actions, but you must take those actions in order from lowest to highest number 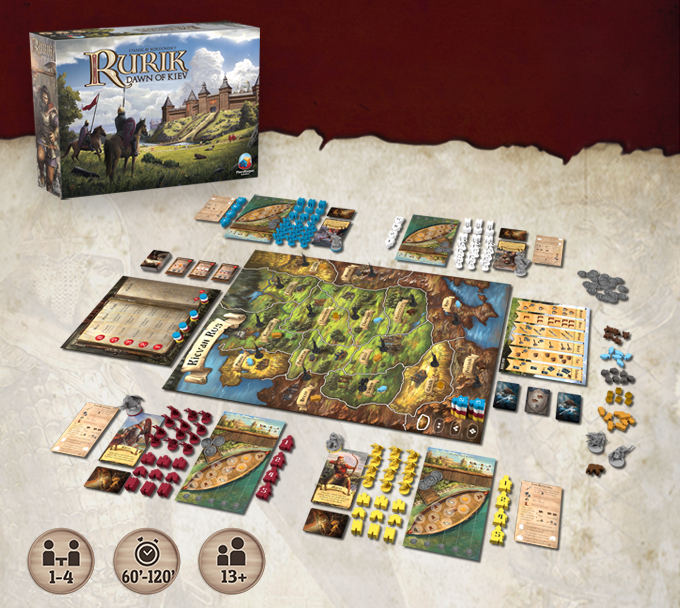 PieceKeeper Games and Brieger worked closely over many months to refine Rurik: Dawn of Kiev's core gameplay and highlight its unique strengths. Work primarily focused on playtesting and gameplay streamlining.

In addition to core gameplay and development of additional stretch goal content, Brieger Creative designed and developed the solo mode for the game, featuring a new Rebellion AI that shifts priorities during play, working actively against the player's goals.

"John was very instrumental in honing the final gameplay for Rurik. More importantly, he developed a clever solo mode against an "automa" AI that is unpredictable and changes tactics. John's extensive playtesting efforts with his wide network of gamers provided invaluable feedback prior to our KS launch. I highly recommend using John's services. " — Kirk Dennison, PieceKeeper Games

Rurik features multiple paths to victory, including one focused around taxing your lands to produce various goods. In the original design, players collected goods off the board and kept them in their personal supply next to their other pieces, scoring for collecting unqiue types of goods. This was generally perceived as an underpowered strategty relative to other parts of the game, and players found it unrewarding.

Based on our analyis from playtesting, we revamped the system to have players place their collected goods into a trade boat. Just the organizational incentive of placing goods into the arrangement was enough to show that contrary to earlier data, goods were the most powerful strategy in the game. We ended up having to increase the difficulty of the goods path for the final release. Had we not experimented with the organizational design, we would not have caught the issue.

"Rurik is an intriguing game where focus on proper timing is equally as important as action selection. A strategic delight!" — Ryan Metzler, The Dice Tower