Working together, players must complete a movie by shooting five scenes. On a turn, a player will roll the crew dice and assign them to take a variety of actions, including building sets, placing crew on sets, pitching ideas, and resolving problems. Each player takes on a specific role, such as Director or Production Designer, bringing their own unique powers and personality. To win, the players must complete the movie and have it be good enough quality, without running out of time or budget.

The B-Movie Expansion adds a new genre mechanic, the new Equipment card type, and a ton of additional content. 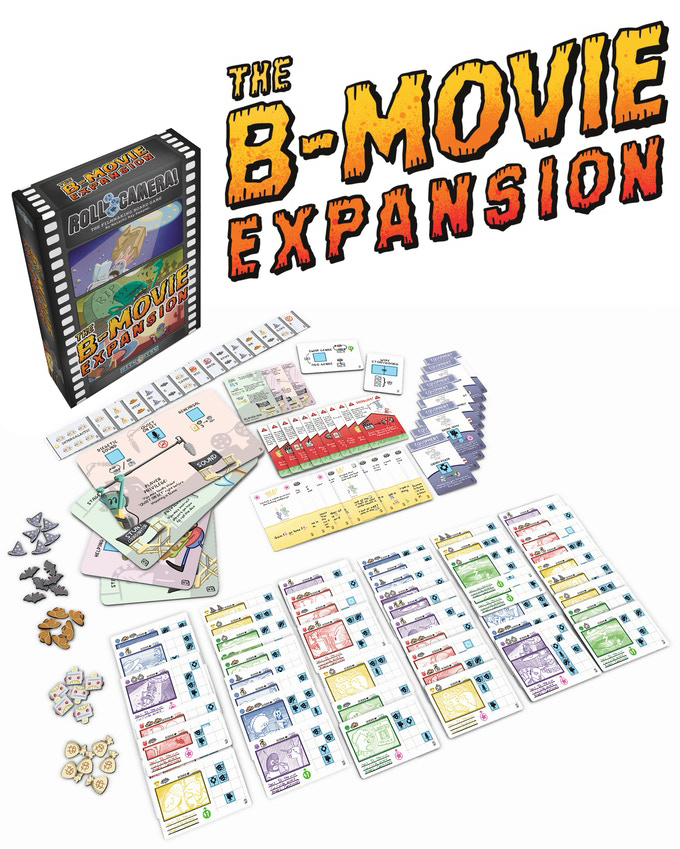 The design of The B-Movie Expansion was very open when Brieger Creative was brought on board. The client and co-designer thematically knew it had to be based around major film genres, such as Western and Horror, and ideally it would involve a strong new mechanic to get players excited about buying the expansion.

Working with Keen Bean we deepened the proposed system for genre token manipulation. As an additional win condition, players now also needed their completed movie to have specific genre tokens. Each of the game's five genre types has an associated genre token. These tokens spawn on newly revealed Scene cards, and players could add, swap, remove, and interact with genre tokens in a variety of other ways. This created more thinky gameplay with an approachable token manipulation puzzle.

Another system added to the expansion that was not planned initially was Equipment cards. This new card type provides players with a powerful single-use ability, and players are provided three face-up Equipment cards for each game. This system was originally conceived to offset the added difficulty of the new genre requirement in a more strategic way than just providing additional starting budget or time. These were later expanded into a full 15 card set, providing an additional major selling point and adding strong replayability. 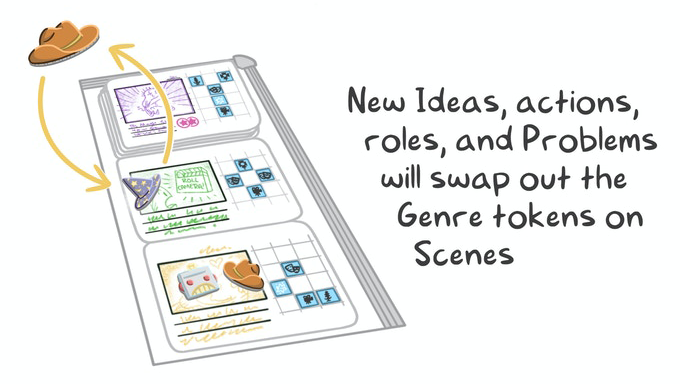 Early playtesting revealed players really enjoyed the cooperative aspect of the game, as well as the tone and humor. Expansion content was adjusted and developed to fit this response. New player board powers were created that granted other players bonus abilities or combined well when used with other player boards. Playing into player's response to the humor, the new Middle Scripts are inserted between the scripts to make a longer combined name, such as Shockingly Outrageous Enchanted Grandma. Genre tokens were designed to be placed directly on the art of Scene cards to let players "dress up" the art, such as putting a cowboy hat on zombie.

"It has been a genuine pleasure working on this expansion with Brieger Creative. From the beginning they were on my wavelength and made it extremely easy (and relieving) to trust them with the finer points of the design... All the results speak for themselves, Roll Camera has never been a better game." — Malachi Rempen, Keen Bean Studio

An additional part of Brieger Creative's work was to refine a brand new semi-cooperative mode. The foundation of this mode would have players competing to get the most victory points while still needing to work together to complete a movie.

The original prototype of semi-cooperative mode delivered to Brieger Creative had players completing secret objectives to earn individual points. Play testers didn't love this. There wasn't enough depth or strategy, it felt very random, and players had little clear incentive to work with each other.

Developer John Velgus explored many versions of a semi-cooperative mode during the project. These variations all featured a variety of ways to score individual points, each player having their own pool of money, and a mix of public and private scoring — collectively giving players tangible resources they could negotiate with and providing opportunity for strategy while still keeping some of the surprise of the unknown.

Despite this effort, the best versions of competitive mode were only OK to players. There were some core issues that persisted from the original base game that was built to be strictly cooperative. Number of players, balance of content, and especially the cooperative nature of having to work together across multiple turns, all of which were non-issues and often benefits in cooperative mode, were disastrous for semi-cooperative. Yes, these issues probably could be designed around with new gameplay, rule exceptions, and removing certain cards for semi-cooperative mode, but it would be a complex mess that wouldn't even feel like Roll Camera any more.

After much exploration and discussions, the client agreed with Brieger Creative's recommendation to scrap the semi-cooperative mode entirely. Removing it allowed us to explore new design space and interesting effects in the expansion. The additional box space and cost designated for the mode was now free for the client to include upgraded components and new content. These kinds of recommendation are among the hardest calls we make as developers, but our focus on rigorous playtesting allows us to make them with confidence and create stronger products.

Praise for The B-Movie Expansion

"The base game was already top ten of the year for me. But I wouldn't be surprised if this expansion... pushes Roll Camera! into my number one game of the year." — Richard Ham, Rahdo Runs Through

"It mixes just the right amount of theme and flavor for me to really feel like I can experience the struggles of film production. And it does so in a cooperative but still challenging board game puzzle. I think if you like Roll Camera already... the B-Movie expansion is a no brainer to go ahead and enhance your game." — Jesse Anderson, Quackalope