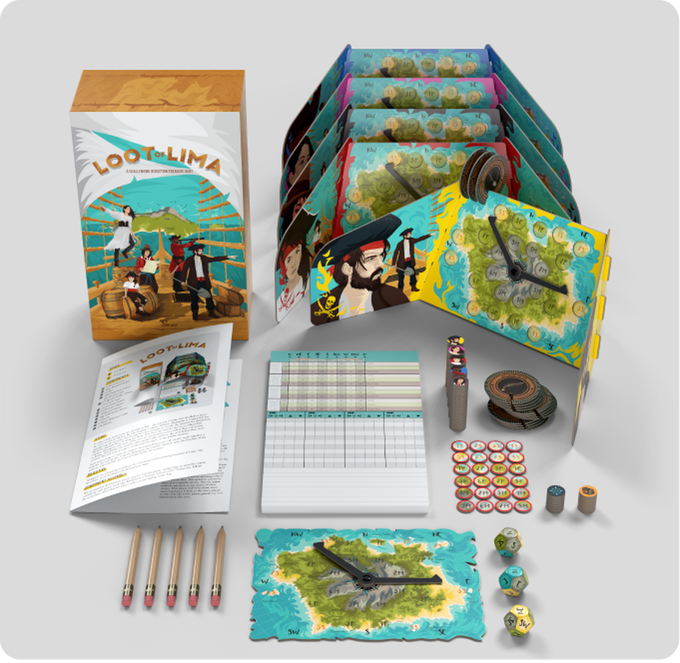 Loot of Lima is a challenging deduction game based on "Deduce or Die" by Larry Levy. Players are pirates searching for the fabled treasure buried somewhere on Cocos Island. Each of you know some locations the treasure can't possibly be, and will have to piece together the rest of the information by asking clever questions.

Updating Deduce or Die from a popular print and play game into a publishable board game involved moving some key informational systems to individual player screens and giving players more visual feedback. From a draft provided by Chad Deshon, Brieger Creative worked on streamlining the flow of Loot of Lima's 3-5 player gameplay as we moved it from prototype to final product.

In particular, we payed attention to how information was recorded and used throughout play to inform deductions, iterating many times on note-taking pads, tokens, and other interface aids to assist in play.

"I love that when John's team is developing my game, they aren't just adding their ideas to the game. They are making changes by observing playtests and watching what parts of the game are fun for people. They develop holistically with an eye toward the full product. It makes me confident that my game is going to get better reviews and more sales, and that my customers are going to have more fun." — Chad Deshon, Boardgametables.com

Ensuring that Loot of Lima's play and setup time fell within a 60-90 range was a significant part of development. We saw player engagement dip during the ends of early tests as they grew longer, and knew we needed to accelerate toward the endgame. We made several key developmental changes that shortened playtime without reducing the core puzzle of play.

Loot of Lima's gameplay is dependent on gathering information from other players about whether locations are filled. Rather than Deduce or Die's 27 locations, we use only 24, and players don't need to know exactly who holds each token to win — which cuts down a bit of analysis time at the end of the game.

During testing, we observed player engagment going up significantly once they begun to identify where specific players had pieces in the first 1/3 of the game. Based on that, we added a new setup step in which players pass some information to other players at the table, which accelerates play and gets players into the fun faster.