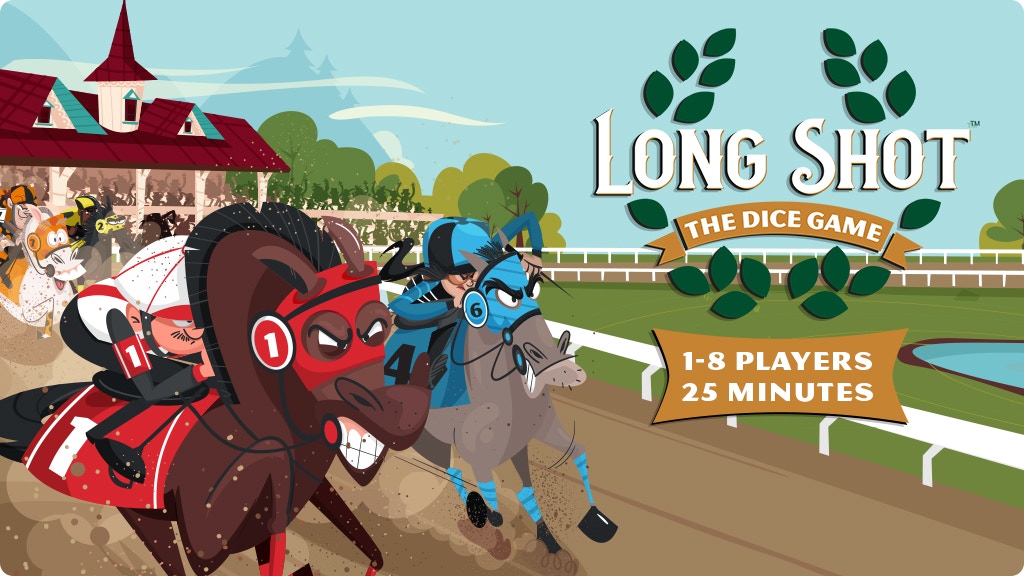 Long Shot: The Dice Game, designed by Chris Handy and published by Perplext, has players strategizing and pushing their luck during an exciting 1930's era horse race.

Players compete to earn the most money by buying horses, placing bets, influencing race movement, and utilizing special abilities. The roll of the dice determines which horses move and the options available each turn, so you'll need to be ready to adapt your plans. Will you play it safe, or risk it big on a long shot?

The overall development direction for Long Shot: The Dice Game was to capture the essence of a thrilling horse race while delivering a streamlined experience. This involved the development team looking very closely at all aspects of the game, figuring out what was best to slim down, revise, or replace.

Making a dice game is a tricky balance between luck and skill. We wanted players to have the surprise that dice provide to make them adapt and take risks. Yet we also wanted to make sure there was room for long term planning, interaction / mitigation of luck, and that the game wasn't too random. Some key changes to gameplay in this regard involved changing the dice probability and the number of horses, adding the Concession grid so players can work towards bonuses that support their strategy, providing players a limited number of Wilds to change dice results, and the creation of a new horse movement system. Content design for the game included creating over 30 unique horse abilities, allowing for deeper strategy and fun interaction with both the luck and skill portions of the game.

Early on in development we noticed that the original dice system that used five dice was confusing to players. Through gameplay changes and optimization, we reduced that system from five dice to two dice. This change brought much needed clarity and reduced downtime, without sacrificing any of the fun. The component savings by cutting three custom dice are massive, and the money saved more than paid for our development fee.

One core part of Long Shot: The Dice Game that changed as a result of Brieger Creative's involvement is the horse movement system. The original horse movement system moved a single random horse 1-3 spaces and might allow the active player to move some of their owned horses as well. This had significant issues with referencing complexity, players missing steps, and uneven movement across player counts.

Players really enjoy this new layer to the game. Being able to influence horse movement allows for long term planning, informed choices, and adaptive game conditions. Players can choose their level of investment on how likely a horse will move, and multiple players can collaborate. Adding X's to horses that have fallen behind or statistically move less often makes them a more viable option even mid to late game. Using the dry erase components in an additional way gives a nice tactile feel to the roll and write aspects of the game.

"It does a great job of evoking the suspense of a race, while multiple scoring elements ensure that more than just the wnning horse determines the winner of the game." — Chris James, Casual Game Revolution

"Perhaps the biggest surprise in this little game was that it was also an unexpected love letter to solo players." — Adam Reynolds, Board Game Squad