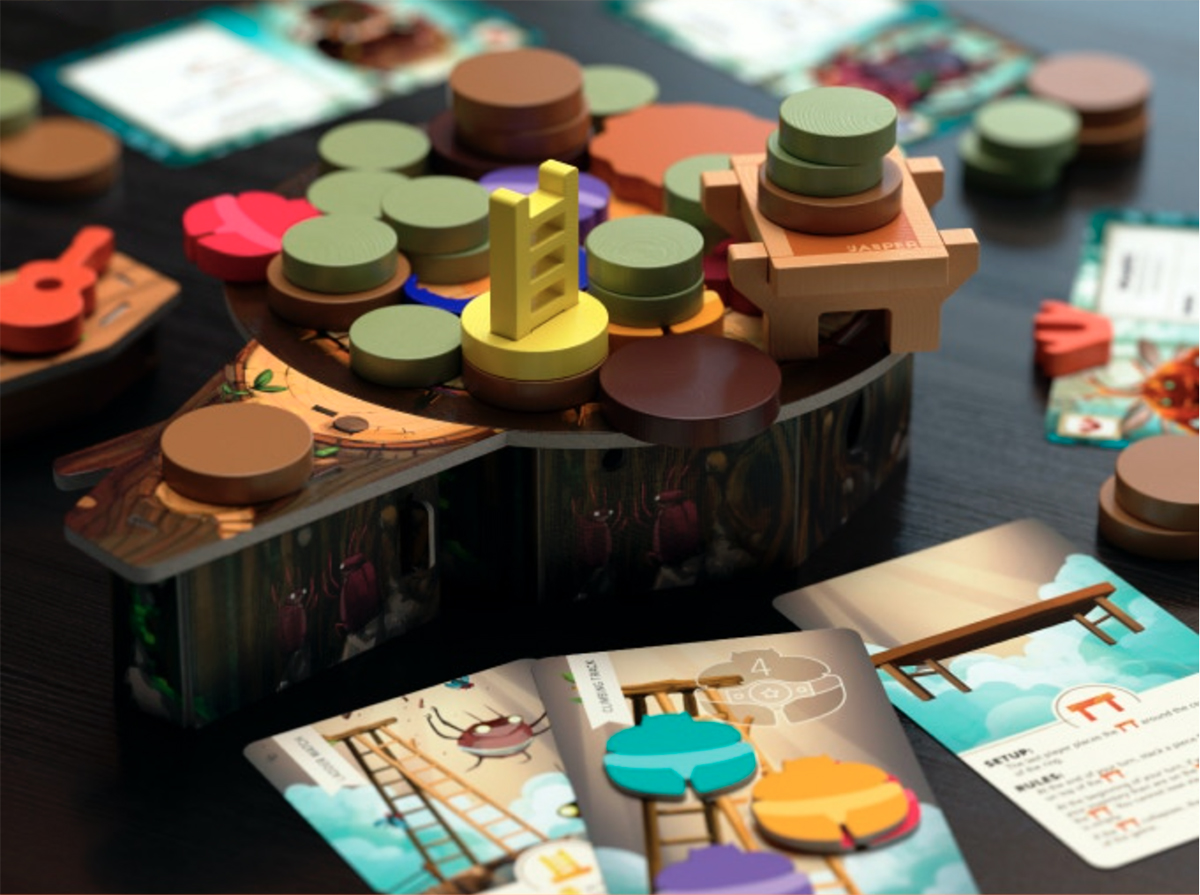 Kabuto Sumo: Total Mayhem is an expansion to the beetle wrestling game Kabuto Sumo. Total Mayhem is designed by Tony Miller, Michael Dunsmore, & John Brieger and published by Boardgametables.com. Now, your insect wrestlers participate in wild new match types and use dangerous items in the ring. Every game features a new item and new match type combination, for at total of 56 new ways to play.

Working alongside Tony Miller, the designer of Kabuto Sumo, we designed a way to bring the thrills of American-style professional wrestling to the disc-pushing physics action of Kabuto Sumo. Starting from theme-first concepting, we design eight new physical pieces: each of which has two new ways to play. Items give players more options on their turns and tend to add new physical elements, while Matches radically change play and can even add new ways to win.

When we started looking at Kabuto Sumo expansions, we all brainstormed separately and then came together to discuss. We had started going through a couple different ideas, like more wrestlers or a new ring shape, when Tony (designer of the original Kabuto Sumo) said he was thinking about an expansion that introduced new items into matches, inspired by "gimmick matches" from American-style pro wrestling, immediately our whole meeting shifted and suddenly we were talking about our favorite objects used in pro wrestling through the years. The Objects expansion was born at that moment.

American-style pro wrestling has a long history with "foreign objects" which were predominantly used by villains (heels) to "cheat" and build sympathy for the heroes (faces). As time went on, the association of weapons with pro wrestling became so solidified that companies leaned into it and entire match stipulations began to revolve around these once "banned" items. In our initial brain-storming session, we started by listing out items that had to be in the expansion (tables, ladders, and of course the humble steel folding chair). We then shifted our focus to listing existing match types like the brutal "Dog-Collar Match" or the now-classic "Money in the Bank" ladder match. Once we had exhausted that, we started dreaming up new types of matches inspired by insects and the tiny world that they inhabit, like the "Flyswatter Match" or what ended up as Matchstick Mayhem.

We ordered laser cut shapes of anything and everything we could brainstorm, and tried to let the properties and themes of each piece really guide our design process. As a side benefit there are some very fun pieces and match types that didn't make this expansion, but fingers-crossed maybe we will get to use them in the future. 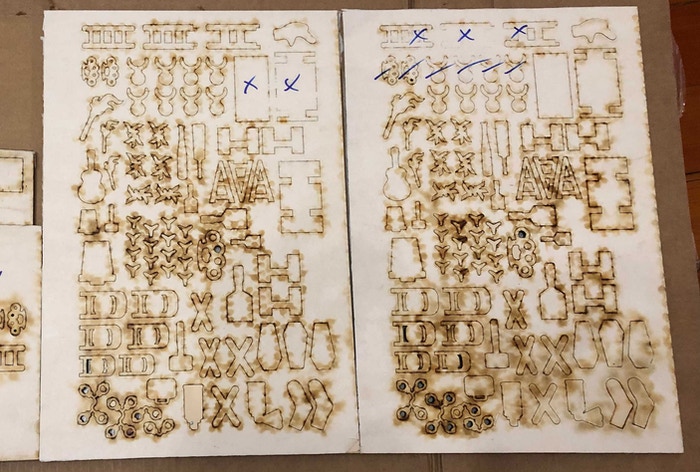 As we worked more on individual objects, we realized the powers we were brainstorming fell into two major categories: victory conditions that radically changed matches and items that provided new powers and opportunities. We knew pretty early on that two additional rules was about the limit for what players would remember during play. Originally, you shuffled all the 9 or so cards and used random two cards each match. That would have been a fun expansion, but by this point we had way more ideas than that. Instead we decided to nearly double the size of the expansion and make a match version and an item version for every piece.

A large part of our testing process was refining between similar shape profiles. We had a wide array of what we called "Hit it With a Stick" shapes, like the Sledgehammer, the Cricket Bat, and the Flyswatter.

While we liked multiple of them, we knew they were too similar to include all of them in our final set. Developing for a game like Kabuto Sumo is not just about which shapes were the best, but about making sure they felt distinct from each other. In the end, our favorite was the guitar, both for its size and asymmetric center of rotation. What was the torch was scaled down and reimagined as a matchstick which suited a set of rules for flag matches that we already loved.

Other pieces went through more significant physical revisions, like the table — which we cut 8 or so different versions of, and the ladder, which went through many iterations before its current style that separates into two pieces. It can be an interesting puzzle to find shapes that are producible and have the physical behavior that we want for gameplay. The idea of having a table that could break apart sometimes, but not without significant effort, was a tough one to get just right.

The last bits of refinement were really nailing in the match types — making sure each new type of match you played with made a huge impact on the way the game played out, whether it’s climbing the ladder to win in "Escalation" or burying your opponents in an an avalanche of special pieces in the "Grave Consequences" coffin match.

Kabuto Sumo: Total Mayhem has a huge variety of new ways to play Kabuto Sumo, and is some of the most fun we've ever had working on expansion content for a game. We're all very excited to get it into player's hands, and hope they enjoy the mayhem!

"Just a delight. It's smart, cheeky, and integrates seamlessly with the game." — Jack Eddy, Cardboard Herald

"This, to me, added everything I needed for the game to shoot up another level." — Tablenauts