CATastrophe: A Game of 9 Lives, designed by Josh Norris and published by The Original Sasquatch, is a party game as unpredictable as cats themselves. It blends "take-that" style card play with engaging mini-games.

The Original Sasquatch worked with 17 famous cats to get feline stars into the game as Power Cats, so players can be joined by some of their favorite cats from around the world. 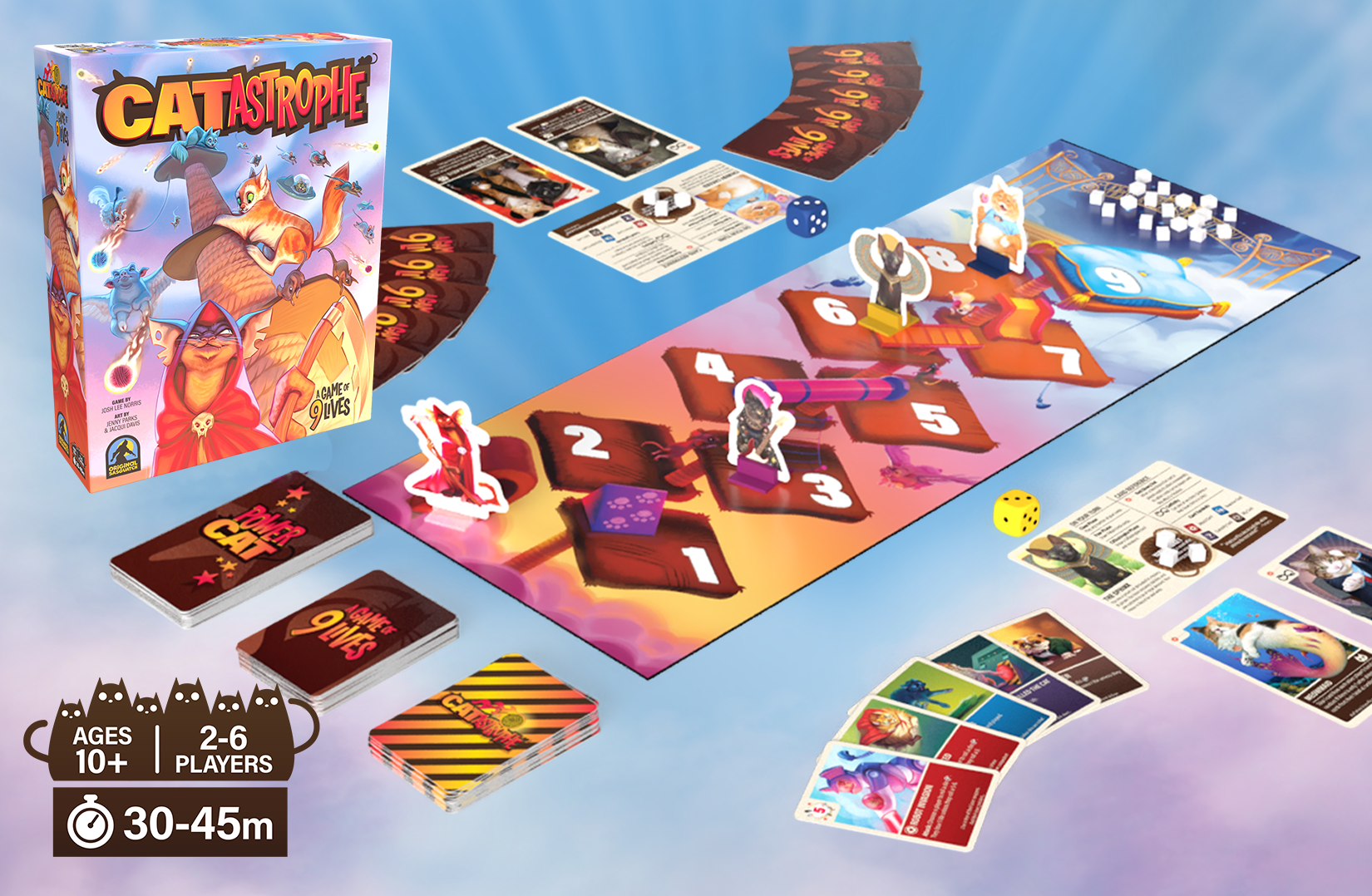 Brieger Creative's development focuses on streamlining the game's text and develop new gameplay content. In a game with a high number of unique cards with text and instructions, clarity and testing were key to make the game as accessible as possible to a broad audience of cat lovers.

We worked closely with the designer and publisher to present a strong product strategy for the first offering from Original Sasquatch: a core product designed with plenty of content to do well at retail as well as an expansion split that doubles the number of Catastrophic Events, the mini-games that testing showed were the highlights of gameplay.

Being involved end-to-end on the process let us flow smoothly from assembly print and prototype files to directing Kickstarter graphics and identifying media outreach opportunities. We were able to leverage our knowledge of the game and its influencers to create very personalized marketing assets for each cat that appeared in the title, which we provided out to partners for marketing and advertising.

Working with Original Sasquatch on their product plan, they had already identified two key areas for potential premium Kickstarter content: opportunities for backers to get their cat in the game, and selling posters of the cats included in the game. We recommended developing a small expansion to be released alongside the CATastrophe base game, focused on expanding the number of unique mini-games players could play. We designed a significant number of new events, some of which went to the base game, and others to the expansion.

Over 75% of orders placed during the Kickstarter included the new expansion, generating over $30,000 in additional pre-manufacturing sales.

We also looked for new forms of customer outreach beyond a typical Kickstarter marketing cycle. Part of that was leveraging the fans of the real cats included in the game, like Lil BUB and Cole and Marmalade. For each cat, we created specialized asset packs for them to use for their social media, including premade collages and transparencies for creators to put their own spin on things. 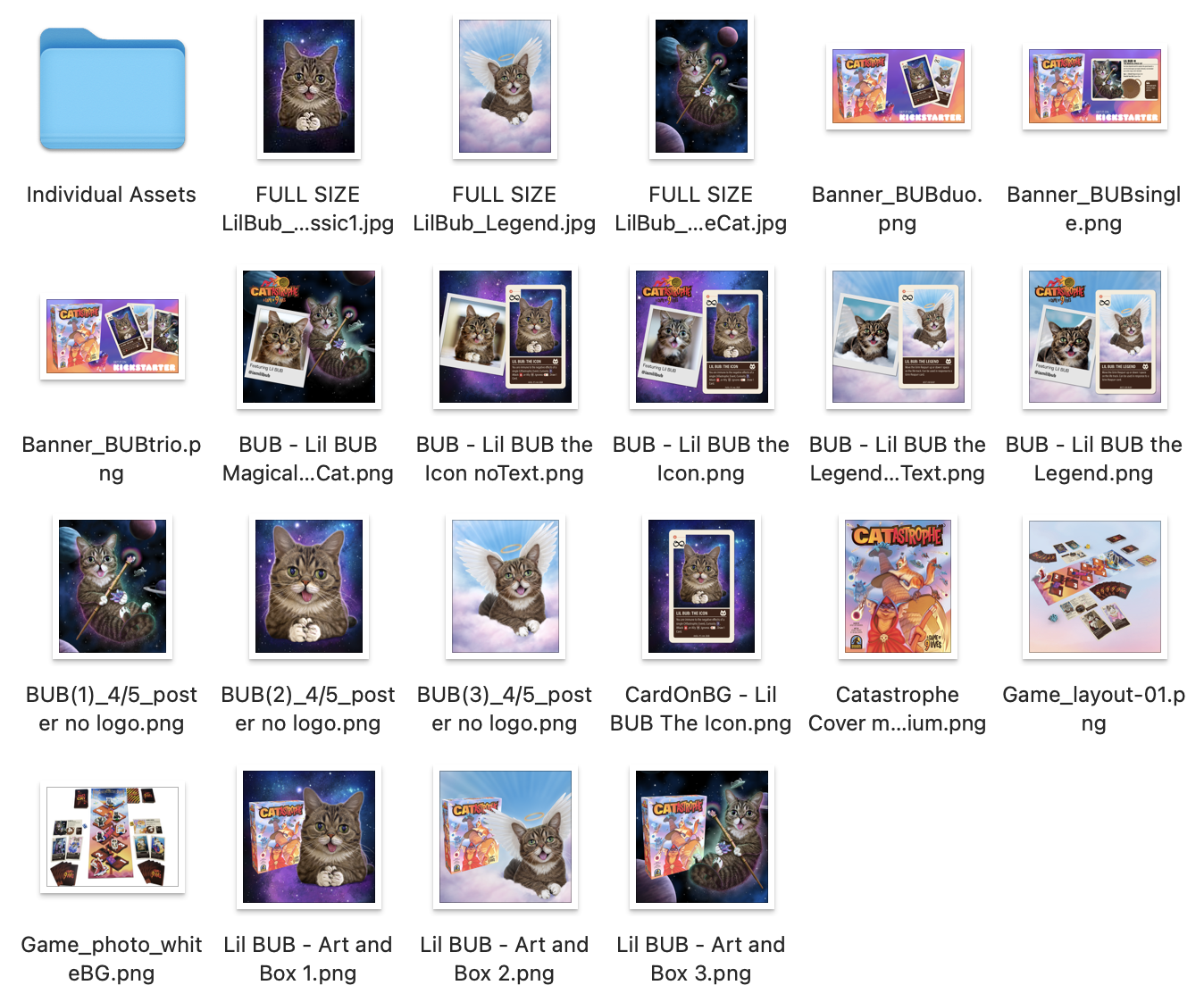 Instead of the youtube-centered previews typical of a hobby boardgame Kickstarter, we focused on a Tik-Tok first media strategy, partnering with creators to post gameplay highlights that would reach a wide, casual audience through organic discovery. With concerted efforts to reach new customers, a full 1/3rd of CATastrophe backers were brand new to Kickstarter.

"CATastrophe is a party game everyone will want in their collection! ...It's one of the best party games I've played to date." — Derek Pederson, Woosung Boardgames

"There is so much personality in all of these animals... across all the cards the art is just PHENOMENAL." — Alex Garramone, Bored Board Games