Cartographers Map Packs, designed by Jordy Adan & John Brieger and published by Thunderworks Games, are bite-sized expansions for Cartographers and Cartographers Heroes. Each one sends players to exciting new locations in Ulos, the shared universe for all of Roll Player line titles from Thunderworks games.

Like its critically acclaimed base game, players draw on their map sheets and earn reputation by carrying out the queen's edicts. Each map pack has rules that fit on a single sheet of paper — providing one key twist to gameplay, along with a new pad of map sheets and several new cards.

For example, in Nebblis: Plane of Flame, players destroy spaces on their map as a massive volcano erupts, while in Kethra's Steppe, players light beacons on the top of mountains to activate a new category of scoring card. 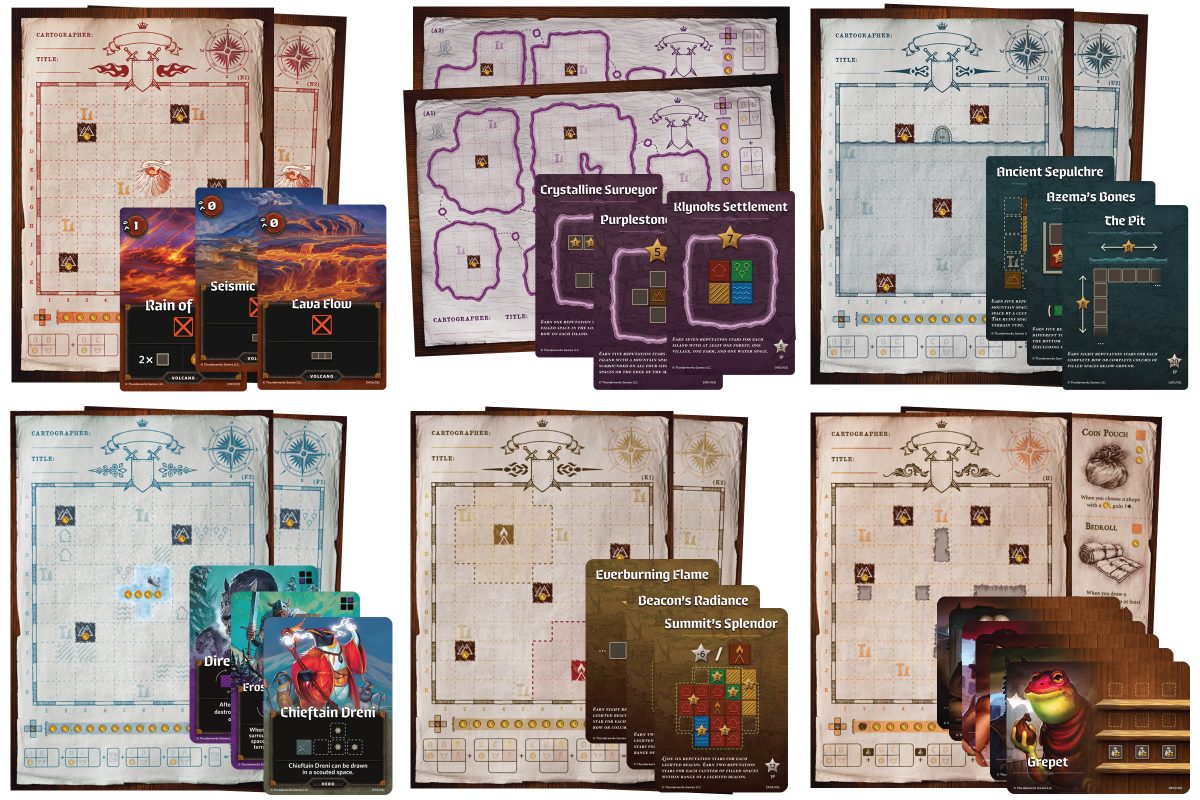 Brieger Creative developed the base game of Cartographers, and Thunderworks Games brought us on to build out the next stages of the product. Working with the designer of Cartographers, Jordy Adan, we've designed and tested six expansions in the map pack format. The small format of map packs let us take advantage of our remote testing program to rapidly iterate and turn around design and development on up to three expansions simultaneously. The first three map packs released in 2021, and the second three released in 2022.

Each map pack's contents include a pad of map sheets, a rules sheet, and several cards. For a single player, only one map sheet is generally needed. That means to print a copy of the expansion at home, players generally only needed to print 3 to 6 pages on standard size paper. Because of this slim format, we were able to get significant participation in a remote testing program where players printed and assembled their own prototypes at home.

We recruited both from our existing testing pool of over 700 groups as well as dedicated groups of Cartographers players from Facebook fan groups and BoardGameGeek. Only players who already owned the base game were eligible for the program. In the end, we had over 100 unique groups testing the map pack series.

For map packs 4,5,6 we received data on about 250 games through this program with minimal setup and management time from our side — allowing the project team to focus on design, iteration, running moderated tests, and analyzing gameplay information. As map packs 4,5,6 were developed during a period of the COVID-19 pandemic where vaccine availability was low, being able to get consistent test data from remote testing was critical.

One important factor in the success of the testing was keeping the burden on testers as low as possible. We used several tricks to lower the amount of data entry players needed to report games. For example, instead of our reporting form requiring manual entry of player scores, participants uploaded a photo of their completed map sheet alongside each report. The picture of the map sheet let us verify the play and we were able to pull rich data from the sheets on our time.