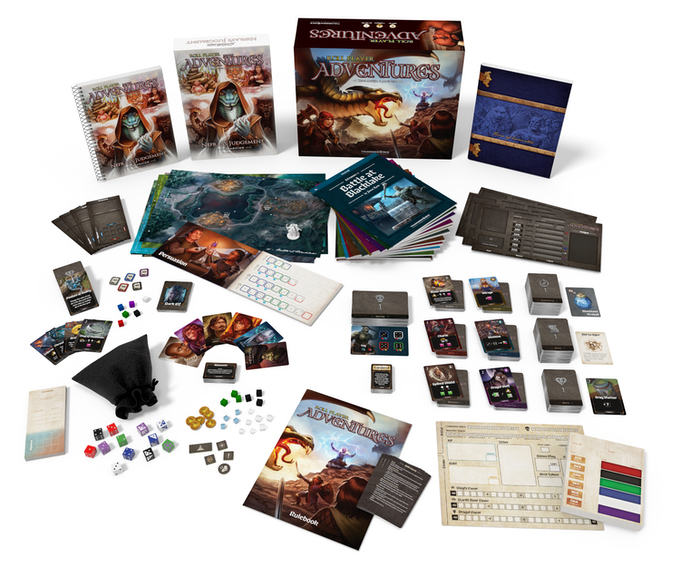 Roll Player Adventures, designed by Keith Matejka & James Ryan and published by Thunderworks Games, is a cooperative storytelling board game for 1-4 players set in the world of the critically acclaimed dice manipulation game, Roll Player.

In each of the game's 12 storybooks, you'll be asked to make choices, complete skill checks, and fight battles that will permanently alter the world of Ulos for that adventure and in future adventures. You'll find new allies, make enemies, and uncover secrets that will change the world around you. Whatever choices you make, someone will remember — and respond.

Roll Player Adventures was an intensely collaborative development process spanning over 16 months of development work. Focuses included campaign progression and tracking impact of players as they moved through an enormous branching storyline. The game and its expansion, Nefras's Judgment, comprise over 400,000 words of mechanical and narrative text.

In addition to refining core mechanical elements, development also offered the opportunities to push product and narrative in new ways to suprise and delight players — keeping them interested even over the course of 12 games. Working closely with designer Keith Matejka and lead writer James Ryan, we introduced new gameplay elements including boss battles to cap certain adventures, new types of discoveries to provide late-campaign twists, and secret components and puzzles for players to discover.

"Roll Player Adventures was a massive project, with 400,000 words of branching narrative and a ton of card powers and interactions. John and Brenna helped us deliver a product that was not only less buggy but also improved in its story, its mechanics, and in the way that story and mechanics interacted with each other during the flow of play. Very grateful for their involvement." — James Ryan, Lead Writer of Roll Player Adventures

Making each character feel special is an important part of the roleplaying game experience — so developers Brenna Noonan and John Brieger worked on a number of changes to the character decks and advancement systems to widen the options for how characters can play for both imported and pregenerated characters. Each character has several core mechanical elements: A hand of cards representing their equipment and skills, a set of 6 attribute scores, and their class ability. 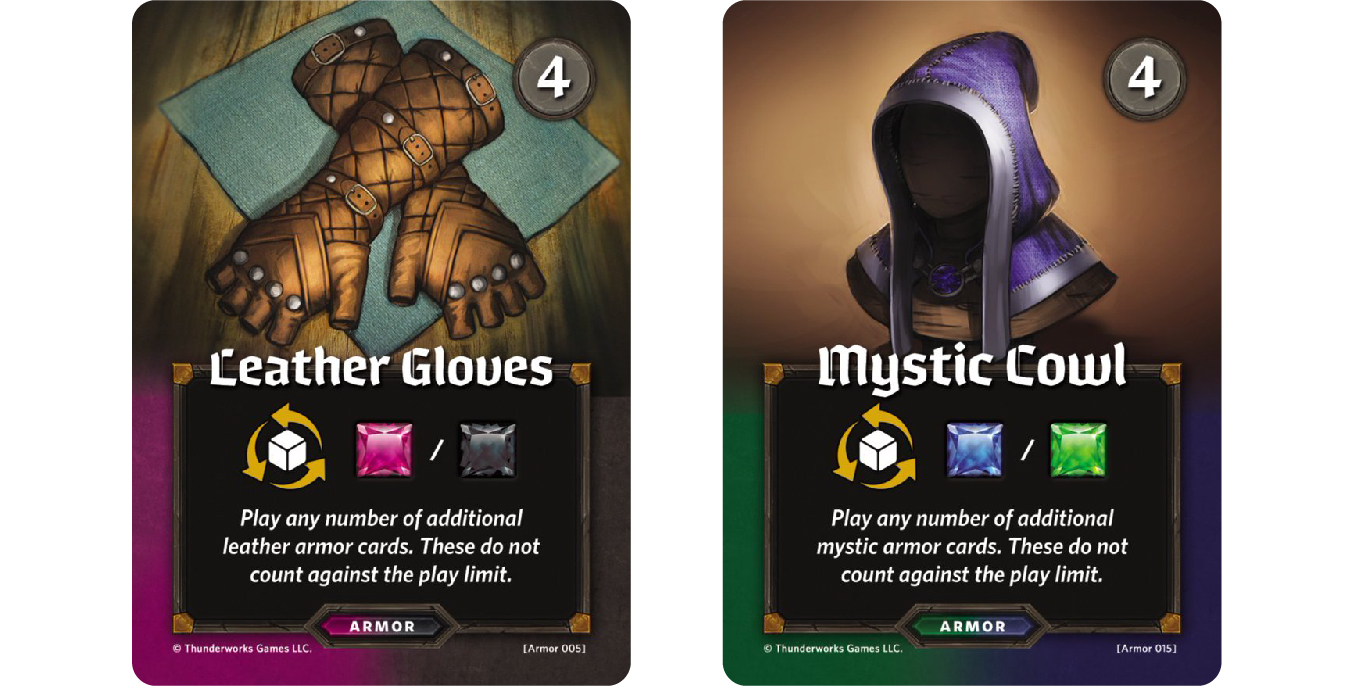 We started by evaluating the core sets of cards — some have more abstract puzzle-solving abilities, but we still wanted to connect them back to theming and character creation. Armor cards, which allow you to reroll dice, we added a set collection ability. You can play any number of armor cards in a single set for one play action. This echoes Roll Player, where armor is scored in sets & encourages players to collect and specialize. 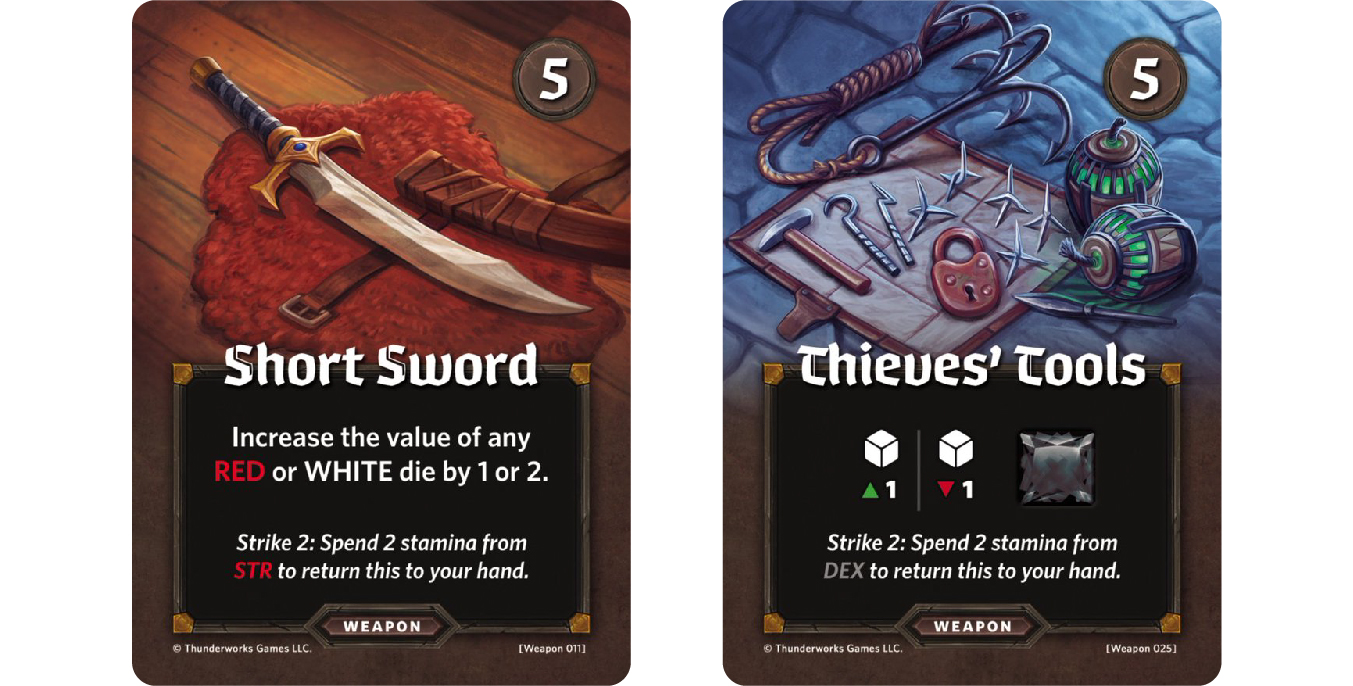 Playtesting saw players feeling odd that they couldn't use a weapon card over multiple rounds of combat. Adding the new "Strike" ability to the weapons gaves the feel of using a signature weapon, and encourages players to build up specific attribute scores to do so. 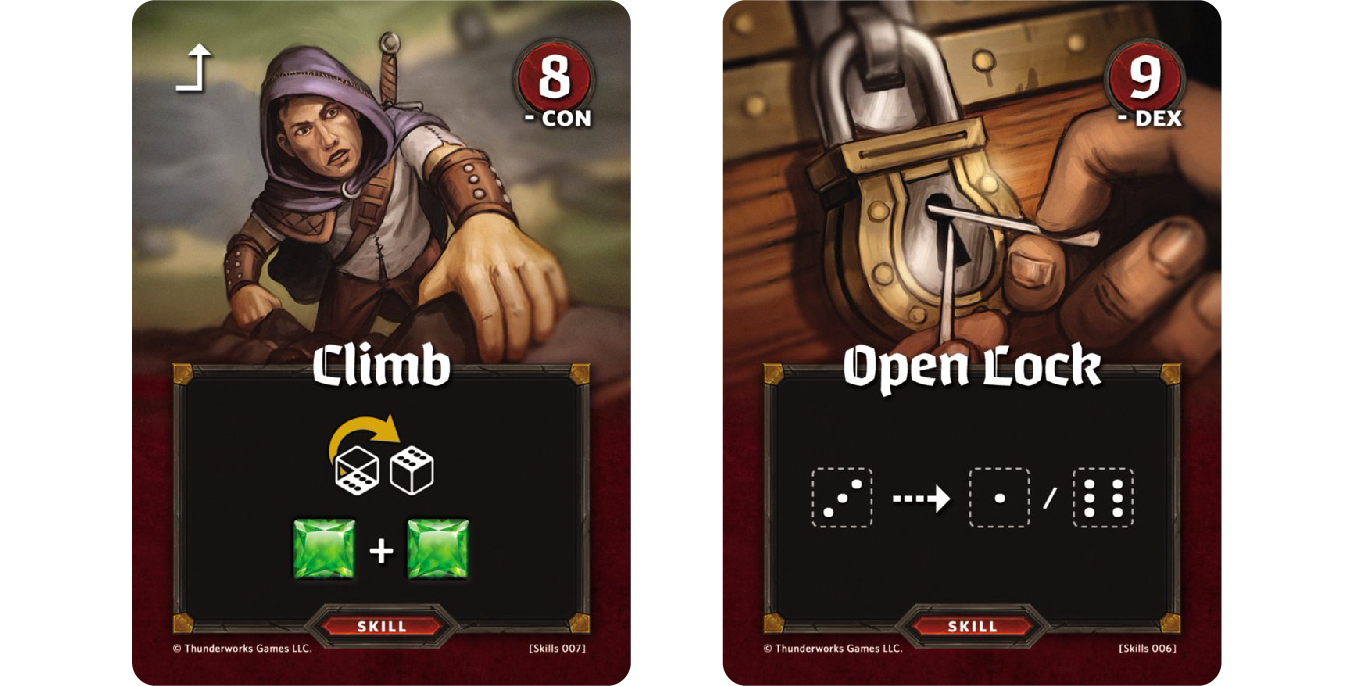 Immediately in testing, we saw improvements in the conversations players had during postgame advancement, choosing to increase attributes and assign new cards based on character individuality.

As part of that, Brenna reworked the advancement system for character attributes to encourage more specialization and scale better across player counts. The Mastery Track on the party journal gradually increases in XP cost, and caps scores without punishing specialization. 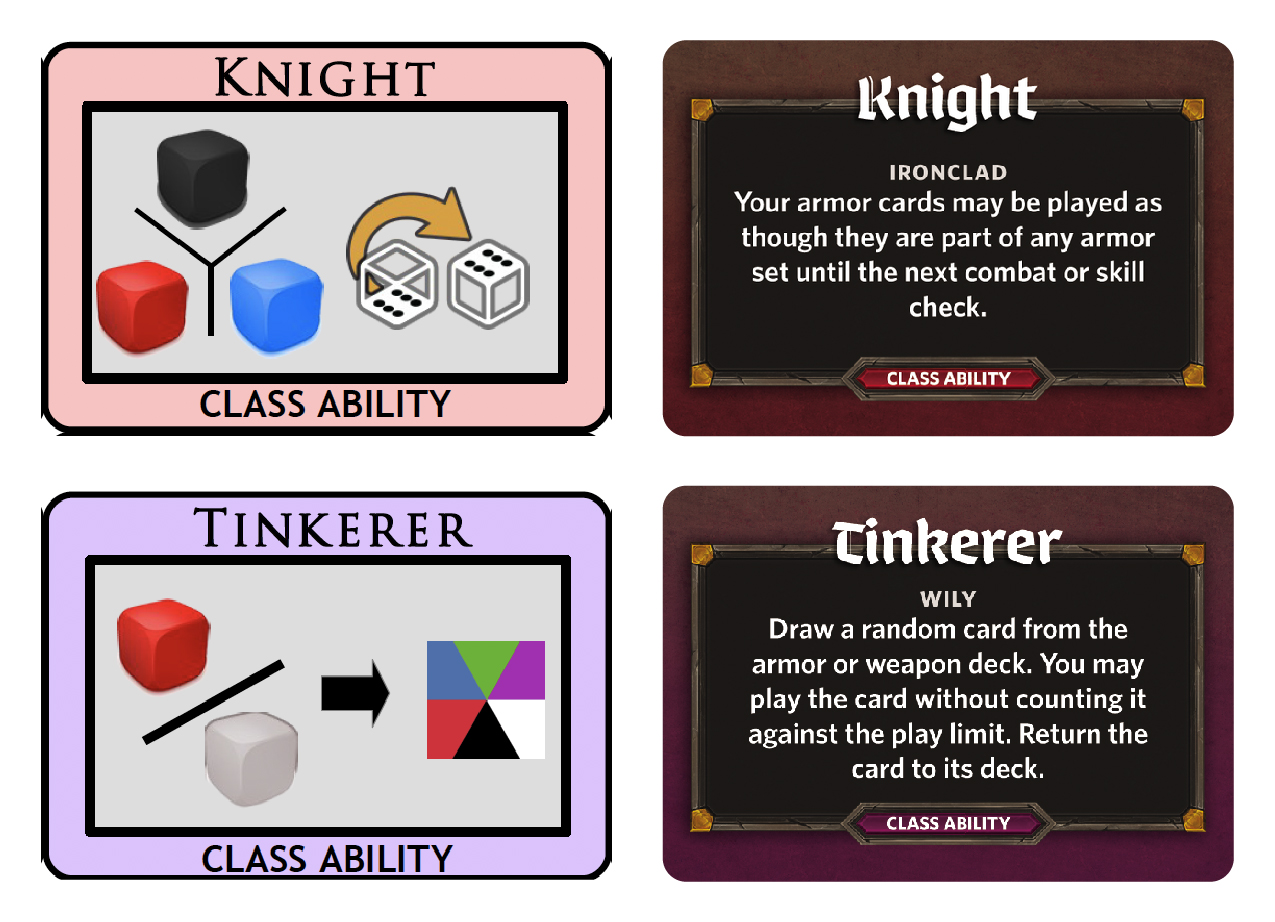 Lastly, we reworked the class abilities for all 36 classes from Roll Player. Previously, these were mostly abstract dice manipulation abilities similar to the primary equipment cards. Together, we wrote new abilities tied more closely to the thematic identity of each class.

"A wonderful implementation... full of really interesting moments... that will end up in small ways and very large ways changing the world and how you interact with it." — Richard Ham, Rahdo Runs Through

"Amazing narrative, thinky card-play AND the ability to import your Roll Player Characters?!? SIGN US UP" — The Brawling Brothers Podcast